Roundmoor Ditch forms much of the northern and eastern boundary of Dorney Parish.

Roundmoor Ditch, despite the name, is in fact a chalk-fed stream that rises in Taplow and flows southeast, under the Jubilee River, to Dorney Common. There, it is joined by the Cress Brook and continues as the Boveney Ditch, until it joins with the River Thames. 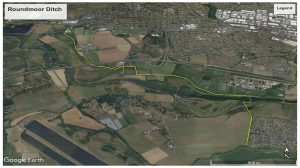 Over the years, Roundmoor Ditch has not been of concern to Dorney residents. However, in the winter of 2014 the Thames Basin suffered significant flooding. This included extremely high groundwater levels in many areas, including Slough. Surface water infiltrated the sewer systems and overwhelmed the sewage treatment works.

Under these extreme conditions, the Thames Water sewage treatment works in Slough were permitted to discharge storm flows into the Roundmoor Ditch. This continued for an unprecedented period of about three months.

Significant concerns were raised by residents in Eton Wick, community groups and landowners which highlighted that the public highly values the river, its ecology and its use as an open space for people to enjoy.

Thames21, in partnership with Thames Water, embarked on a two-year project in 2017 to restore the series of waterways at Roundmoor to a significantly better state than before the 2014 pollution incident and to address community concerns.

Cllr. Stopford confirmed that Thames Water stated they will be clearing the section of the Roundmoor Ditch, which runs past their treatment plant in the next week following confirmation that there are no water voles on site.

He also attended a meeting to discuss future plans for the water treatment plant outflow, where it was confirmed that there will be a new pipe through Dorney Common to the Thames at Boveney to help cope with the envisaged population growth and storm water.  This will be starting in 2023 and completed by March 2025.

Firstly, the Hydrology Survey of the Roundmoor and Boveney Ditch Streams

Secondly the public stakeholder engagement regarding what to do with the outflow from the works will be happening in the Autumn. I have asked that Dorney Parish Clerk can be added to the contact list for this process.

Clearance of the Roundmoor at the Treatment works.

Rosemary Waugh from Thames Water has now had a quote in from their contractor (Maydencroft based in Dorney) and it is now with their Ops team to consider.  One thing she has been advised on by their biodiversity team is there is a lot of tree clearance to be done which ideally would take place after bird nesting season has finished (i.e. October)

15 June 2021: Dorney Parish Council Meeting: Cllr. Stopford reported that he had met with Thames Water on site who had agreed to escalate the issue of clearing out their section of the ditch but he wasn’t overly optimistic anything would happen. He also noted that the Slough Waste and Water Treatment Plant were encountering problems with complying with government regulations concerning ammonia levels and the releasing of water. They would be putting forward three options for consultation in the Autumn – that water (95% of which is treated discharge from the sewage works; however if there is too much rain the discharge would be untreated) be discharged into either the Jubilee River, the Thames or the ditch at Eton. Problems would only get worse with the increasing catchment population. He further noted that the groundwater collecting on the Common had arisen from an incorrect level of added gravel and a Hydrology Survey was being undertaken.

14 April 2021: Dorney Parish Council has been sent a copy of a letter from DEFRA to Joy Morrissey, our M.P., dated 14th April 2021, regarding the floods and flooding risk from treated and, on occasions, untreated sewage flowing into Roundmoor Ditch and then into the Thames (not the Jubilee River) from the Thames Water Slough Sewage Treatment works.