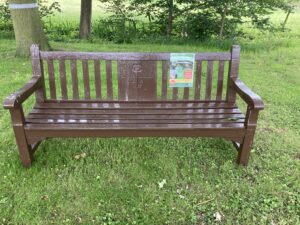 The Oak Processionary Moth has been identified as being amongst the oak trees in the Memorial Garden, Village Road, which is just before the cattle grid for Dorney Common. They were initially spotted and identified by staff members of Maydencroft at Pigeon House Farm, and we thank them for their vigilance on behalf of the community. The Memorial Ground is owned by Dorney Parish Council. The identified trees have been taped and Forestry Commission notices placed on the benches.

The Forestry Commission website has full details of this pest.

The caterpillars (larvae) of oak processionary moth (OPM) are pests of oak trees (trees in the Quercus genus), and a hazard to human and animal health. OPM was first accidentally introduced to England in 2005 and is subject to a government-led programme of survey and control to minimise its population, spread and impacts.

OPM is a tree pest because its caterpillars feed on the leaves of several species of oak trees. Large populations can strip whole oak trees bare, leaving them more vulnerable to other pests and diseases, and to other stresses, such as drought.

A video highlighting the dangers of OPM is available through the Forestry Commission YouTube channel.

In the UK, it is established in most of Greater London and in some surrounding counties in South East England. See the distribution map for its current known distribution. Dorney sits in the Buffer Zone for this pest, which currently is between Heathrow (approx.) and Junction 10 of the M4 (approx.). Within this area the Forestry Commission controls the pest in order to prevent further intrusion into the rest of the country. 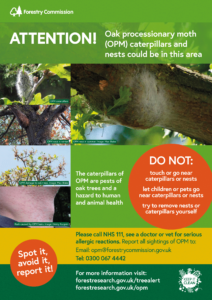 Dorney Parish Council has reported the sighting of the OPM nests to the Forestry Commission and their information leaflet has been posted in the Memorial Garden. Maydencroft has, on our behalf, placed warning tape around the affected trees.

The threat to people and animals

Older caterpillars develop tiny hairs containing an irritating protein called thaumetopoein, from which the species derives part of its scientific name. Contact with the hairs can cause itching skin rashes and eye irritations, as well as sore throats and breathing difficulties in people and animals. The risk of exposure to these hairs is highest in May and June.

The caterpillars can shed the hairs when threatened or disturbed. The hairs can be blown by the wind and they accumulate in the caterpillars’ nests, which can fall to the ground. They can stick to trunks, branches, grass and clothing as well as to equipment, such as ropes, used by tree surgeons and forestry and ground-care workers.

Among the groups most vulnerable to the health hazards are: