“I will put forward your recommendation that the proposed restrictions around the Dorney area are fully withdrawn from the “Parking Review of the areas around places of natural beauty and Country Parks” Scheme.”

At the Dorney Parish Council meeting on 15 June 2021 it was agreed that we would advise Bucks Council that we would like all 13 of Dorney’s roads removed from this review.

With support from our Cliveden Ward Councillors, especially George Sandy, we are pleased that our request has been noted and will be put forward to Bucks Council.

Dorney Parish Council does recognise the need for a comprehensive Traffic Plan for Dorney including traffic calming, speed limit changes and parking. We have plans to address this.

15 June 2021: Dorney Parish Council Meeting: The Chair reported that Bucks Council had been written to asking that all Dorney roads be removed from the scheme as there would be catastrophic consequences for the community. They had responded that they were still waiting to collate the response from residents to the recent public consultation. County Cllr. George Sandy noted that Burnham/ Lent Rise residents had shown a great willingness to create residents’ parking but urged everyone to be guarded about any steps that could lead to the urbanisation of the area. Cllr. Westcott- Wreford asked what other avenues existed to give feedback and Cllr. Sandy said there would be opportunity when any proposals were drawn up.

30 May 2021: The Diocese of Oxford makes the case for no parking restrictions along Court Lane

11 May 2021: Dorney Parish Council considered this Review at the meeting on 11th May 2021 and resolved to write to Ian Thomas, Parking Officer, at Bucks Council requesting that the Dorney Area Parking Review be stopped immediately and the 13 roads involved withdrawn:

DPC Letter to Transport for Bucks re Parking Review 18MAY21

The letter refers to the two papers that Dorney Parish Council had received from the Dorney Traffic Working Group, raising alternative approaches (Parking Review Response) and some questions. These are:

6th May 2021: Residents received a letter from Bucks Council regarding a Proposed Resident Parking Controls in Dorney Lake Area.

The proposal is that they, “with Transport for Bucks, stakeholders and working with our local Councillors”, will implement “permanent parking restrictions at various locations following an increase in illegal and antisocial parking, and verge damage, following the lifting of the COVID-19 lockdown.”

Residents are asked to provide their views on a “special” website between 12th May and 6th June.

From other similar Reviews, there appear to be a number of Stages until “the final proposals resulting from this informal consultation will then go to a statutory legal consultation before any work can be implemented. Assuming support from residents, the restrictions should be implemented later this year.”

The areas (except Parking Permit Areas) are shown on the map below: 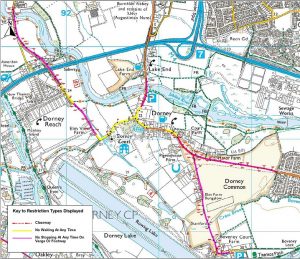 The specific Roads and the Implications (Signage) for those roads is shown below: 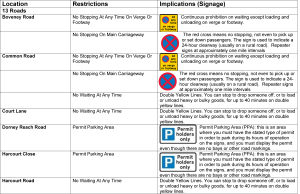